I recently visited the museum in Maria Elena, which not only chronicles the town’s history but also the history of the local mining industry. This visit, paired with my on-the-ground tours of the surrounding pampa and discussions with locals (including my very knowledgeable host father), has my head full to bursting with the interesting story of this area.

Traditionally, not too many people lived here in the pampa. Ancient cultures lived on the coast and famously up in the mountains (think: Incans), but the vast Atacama was considered too harsh to be habitable. However, that does not mean that the ancient peoples did not leave their mark on this land. Trade routes crisscrossed the pampa, marking the land with petroglyphs and geoglyphs that showed the routes. I visited what is now a popular swimming hole at the confluence of the Loa and San Salvador Rivers but what was then an ancient market and pueblo called Chacance. 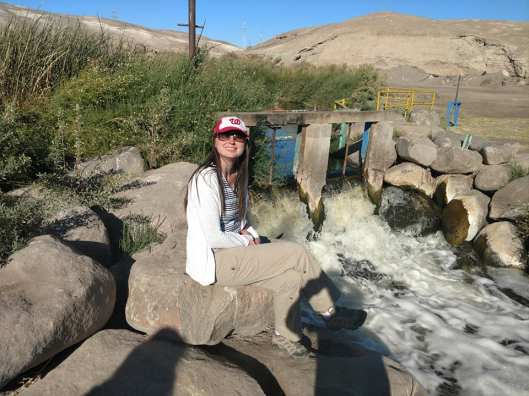 Of course, that all changed when people discovered and learned to exploit the mineral riches in this land. In the Atacama Desert they mine salt, iodine, saltpeter, lithium, and copper. Saltpeter seems to have been the larger industry historically, although copper has replaced it. (Chile is by far the largest copper producer in the world. Peru is second, but produces only about half of what Chile produces). Mining operations were quickly set up and towns formed nearby as people raced in to reap their riches.

Chileans have been here since the beginning, which is interesting because the land was not Chilean then. Where I currently live was the southern part of Peru. The land to my south for many miles, including Antofagasta, belonged to Bolivia. But Chilean companies quickly grew tired of paying taxes on the fruits of their labor to other countries, so they decided they would take over.

For three years the War of the Pacific raged until Chile emerged victorious over Peru and Bolivia (which was ultimately the biggest loser here as they not only lost access to the vast mineral deposits in the desert but also any access to the ocean – still a source of tension between the two countries). Meanwhile Argentina, seeing Chilean forces were preoccupied in the North, made a move to take their portion of Patagonia. Although tensions still run high over this as well, as a whole Chile ended up faring better trading in the southern desert for the northern desert.

Soon after that was all settled and various borders redrawn, there were hundreds of pockets of Chilean civilization dotting a vast swath of land that had barely been inhabited before. They were organized in groups, geographically, with each group being served by a port. Maria Elena eventually fell in a group in the northern part of the region (Chile’s Region II: Antofagasta), along with the towns Vergara, Coya Sur, and Pedro de Valdivia, all served by the port of Tocopilla.

For decades, as the saltpeter mining industry grew so did the number and prosperity of the towns. But all good things must come to an end. As the worldwide demand for saltpeter waned, mines were slowly shut down due to high production costs. Without mines, there was no need for mining towns. My friend, who was born in Pedro de Valdivia, told me how one day when he was a teenager the town was declared “closed” and a bus pulled up to take people away. The people who were not moved to Maria Elena were left unemployed and returned where they originally came from. The ruins of some of these towns still stand, but only ghosts live there now. These towns were, one by one, completely wiped off the map. All, that is, except one. Maria Elena: “The Last Saltpeter.”

I will post a history of the last saltpeter next week!

3 thoughts on “A Brief History of the Chilean Pampa”