I am sitting in Casablanca, Chile right now at the home of a new friend. Casablanca is a small town in one of Chile’s wine producing valleys, and it is the perfect place to sit and ponder what my next move should be. I literally have no plan for where I go next and it is causing me some angina, but I’m trying to pull an Elsa and let it go because it is also incredibly freeing and exciting to just see what comes my way.

Beers in the square!

Exploring the town with Paulina

The church in Casablanca

But before figuring out what is next, I need to reflect on the week that was. Last week I volunteered at an English summer camp here in Santiago. The camps are also run by the English Opens Doors Program, which offers free summer and winter camps for students around Chile. The camps are staffed by a mix of Chilean facilitators (which is how I met my new friend, Paulina) and international native English-speaking volunteers. We had folks from the UK, New Zealand, Cameroon, Nigeria, India, and more working in the camps in Santiago.

My camp was Conchalí, and we were a team of seven and a small group of about 26 students. You could tell right away that it was a special group of students. They immediately took to each other on the first day, becoming fast friends with the other campers. This in and of itself was impressive, as I remember being in high school and being terrified of meeting new people (I still am!) But they quickly connected through their love of English, and singing and dancing a long to all the latest pop hits… and High School Musical.

During the week we had so much fun playing games, dancing, singing, telling stories, and working on group projects. The theme of the camps was movies, so the students worked on a couple of short films of their own during the week. I helped groups of students put together an adorable film about going to a magic school and a story about friendship being the key value to preventing bullying. 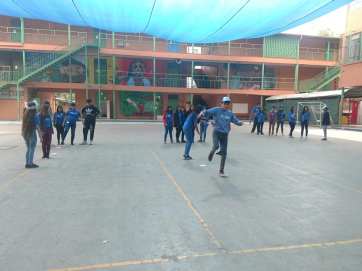 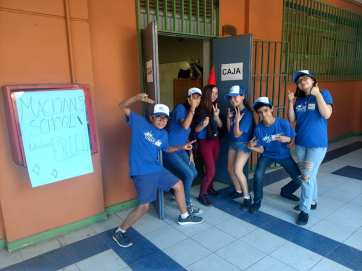 A visit from the mayor!

The main feature of the camps is the lipdub, where all the camps across Chile competed to put together a music video to the song 1999 by Charli XCX. The day was at times crazy, hectic, and frustrating but in the end we put together something really cute (even though we didn’t win). At the end, the campers all sang “I just wanna go back, back to English Summer Camp” to the beat of the song (which had the original lyric “I just wanna go back, back to 1999”).

Welcome to the party!

Farewell message from the kids

On the last day of camp, the kids banded together and took over. We were a little nervous at first, but they ended up being better facilitators than we were! They decided what activities they were going to do, and also worked together to put together a nice surprise farewell message for us. At the end, we held a little graduation ceremony, complete with certificates, snacks, and farewell speeches. Even though I am exhausted, it was definitely a week that I will never forget.